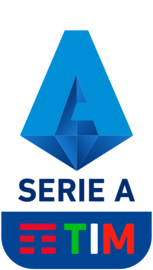 Serie A, also called Serie A TIM due to sponsorship by TIM, is a professional league competition for football clubs located at the top of the Italian football league... Wikipedia